The vehicles required a total investment of €700,000 and were procured by TPER (Passengers Transport Emilia-Romagna), a company recently formed following the merger of the municipal owned LPT company ATC and the regional company FER. Emilia-Romagna’s regional transport councilor Alfredo Peri, Bologna’s vice mayor for mobility Andrea Colombo and TPER Chairwoman Giuseppina Gualtieri attended the launch. The Van Hool vehicles that are now circulating Bologna are equipped with innovative super capacitors that replace conventional electric batteries. Compared to traditional hybrid vehicles, they offer a considerable reduction in fuel consumption through lower exhausted gas emissions. Maintenance costs are also reduced, as they do not need the deployment of battery charging stations at the bus depots, nor the periodical substitution of the conventional costly batteries, known to wear out quickly. Super capacitors can stand a significantly higher number of charge-discharge cycles and last longer than conventional batteries, making both the super capacitor and vehicle more environmentally friendly. Additionally, as super capacitors are not as restraint by low battery charge levels, these new buses make for a more reliable, constant and long serving bus service. The two Van Hool vehicles are equipped with an electric generator powered by an endothermic diesel engine. The generated energy is stored by the super capacitors and released by the electric drive engine during the acceleration phases, to support the endothermic diesel engine, thus reducing fuel consumption and improving the performance. During the braking and decelerating phases the energy produced by the generator is driven to the super capacitors to be stored. In other words, the super capacitors work like a type of super condenser, which can very rapidly store and give back energy in great quantities. The hybrid buses procured by TPER can take 24 seated passengers and 56 standing. It also has a reserved area for one wheelchair and a buggy, and a manually folding access platform for disabled passengers (located at the central door). In his speech, Councillor Peri highlighted that the cooperation between the regions and the City of Bologna alongside the MIMOSA measures specifically contributed to making these hybrid buses a reality on the streets of Bologna. He urged citizens to take advantage of the vast range of high quality, state-of-the-art and environmentally friendly services the city now has to offer. Specific measures highlighted include the integrated bus and train fare system "Mi Muovo" and the possibility to recharge season tickets at cash machines. Vice Mayor Colombo congratulated TPER on achieving an 80 percent eco-compatible rate with its bus fleet. Referring to the new pedestrianisation plan, he talked of city councillors giving up their right to use their own cars and even the Municipal car fleet within the Pedestrian Limited Traffic Zone. He called on citizens to do the same by leaving their car at home to achieve a more livable, less polluted and less noisy city centre. 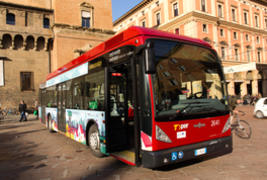