The right blend for the right bus in Donostia-San Sebastian 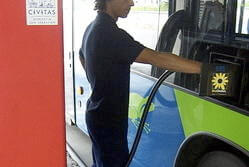 The public transport company of Donostia-San Sebastián has installed a biodiesel mixing station at is own premises, making it possible to vary the percentage of bio-diesel for each individual bus. By doing this, an important barrier is overcome, since different engine types allow for different maximum percentages of biodiesel. During CIVITAS plus, increasingly higher bio-diesel blends, produced from used cooking oils, are being tested.

Biodiesel is not yet a mainstream fuel for public transport companies. Bus manufactures have doubts about the use of biodiesel in their vehicles up to the point that they do not want to provide guarantees if they are run on biodiesel. At the same time, the engines of the newest buses are said to allow for only low percentages of biodiesel.Since the installation of a biodiesel mixing station in its own garage in December 2008, DonostiaBus is able to adjust the biodiesel blend to the demands of each individual bus. In the coming years the company will gain a wide experience on the use of different biodiesel blends for the different types of buses in their fleet. The mix of biodiesel is gradually being increased. In June 2009 there are already vehicles running on a biodiesel blend of 20 percent. This means that 20 percent of the total fuel in its tank is biodiesel while the rest is normal diesel. During CIVITAS plus the plan is to test up to a mix of 100 percent of biodiesel. The biodiesel is produced from used cooking oils collected in the region. 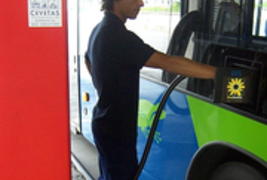