Cities account for about 70% of all CO2-emissions in Europe. Transport is one of the main contributors to these CO2-emissions. This fact is proven by the federal climate protection report 2014 and a study by the VCÖ (Verkehrsclub Österreich – Association of Transport and Mobility in Austria) which show that Austria accounts for the third highest CO2-emissions in the EU per capita. At the same time, Austria ranks best in Europe with respect to people shifting to rail.

From a city’s perspective, there is no question that mobility patterns are changing. This new mobility has to be encouraged and supported – CIVITAS is a good support in this regard. CIVITAS focuses on sustainable mobility and serves as a place where information about projects, funding opportunities and experiences can be exchanged. Even though the local conditions always differ from each other, there is an opportunity to learn from other projects. The so called ‘encounter zone’ is a good example for making use of such best practices from other European countries.

As is happening in the Committee on Transport of the Austrian Association of Cities and Towns, CIVINET allows for the exchange of such ideas and projects. Especially, when it comes to European funding opportunities, it is exciting to hear and learn from successful strategies that other cities have made use of. You get to know each other, can converse about difficulties and learn from each other, as was happening in Graz at the „OPEN EYES – OPEN MIND – OPEN SPACE - CIVITAS politicians speak out – CIVITAS Exchange Tour” on March 12, 2014. Members from all participating countries come together at these events. This year’s event showed again a lively exchange between CIVITAS cities from countries such as Slovakia, Denmark, Hungary and the UK. Again, it was evidenced how important these exchanges are in order to gather ideas for each participant’s measures and to receive moral support from each other. The majority of these measures led to far-reaching changes in people’s travel behaviours and the support of the public sector and the non-motorized transport in the respective cities.

CIVITAS projects also fulfil the roll of giving feedback to the European Commission itself. This way, the European Commission gets a more accurate impression of what cities really desire and need. In connection with an urban agenda, a European-wide city policy that is currently aimed for, tailor-made solutions for urban needs are requested.

The Austrian city Graz participated together with Stockholm, Lille, Pécs and Prague in 2002 in the CIVITAS TRENDSETTER which was 1 out of the 8 winning projects resulting out of the CIVITAS call from the European Commission. In total, 12 million € were invested in the city.

Funding coming from the EU totalled to 4,2 million €. Such amounts are also interesting for other cities!

The full Statement and Interview with the Austrian Association of Cities and Towns on the CIVITAS Initiative and CIVINET German language area can be downloaded below in English and German. 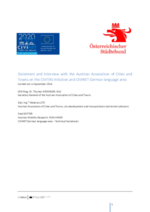