Ploie&#351;ti citizens in dialogue with Europe 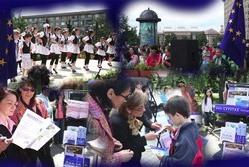 In 2008, The Europe Day joins the European Year of Intercultural Dialogue initiative to promote intercultural dialogue and help raise awareness of cultural diversity with young people, as a major asset to our common European cultural heritage.

For Ploieşti City Hall the celebration of the Europe Day is already a tradition.The new CIVITAS pedestrian area from the city center of Ploiesti became the scene where was running the event entitled “Ploieşti citizens in dialogue with Europe”. On this context, took place spectacles of folkloric and modern dances, performed by the ensembles from secondary schools and high schools of Ploiesti.In same time, having the support of 50 children, members of Ploieşti City’s ecological groups, have been undertaken training actions to prepare and develop the European eco-civic behavior among Ploieşti citizens. In this context, it have been presented CIVITAS and other european projects, by which, Ploieşti municipality tries to implement, at local level, the European policies for transport and energy, by promoting cycling as alternative mode of transport for citizens, as well as energy conservation for a better and cleaner environment.