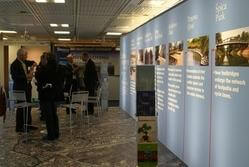 Several representatives of the Municipality of Ljubljana, including the leader of the Integrated high-quality mobility corridor measure, Sabina Popit, participated in the international trade fair MIPIM in Cannes, that took place from 16 to 19 May 2010.

Popit presented the sustainable transport development plan in the city and surrounding areas, which includes the measures of CIVITAS ELAN project. The most pressing assignment of the transport policy is that of promoting various modes of public passenger transport, while limiting personal vehicle transport. This sounds like mission impossible, because Slovenians are quite a car-oriented nation. However, with many measures, which includes a comprehensive traffic management system with the necessary roads, separate lanes for buses and new public transport routes to access the city, new cycle lanes and pedestrian zones that will make city even more attractive to live in, the future seems bright (and green). A roundtable Mayors' think tank brought together 70 mayors from around the world and they discussed the ways to improve the quality of life in their cities. Ljubljana's Mayor Zoran Janković underlined the importance of environmental issues, which was also shown at Ljubljana’s stand. The delegates from the city presented plans which predict that pedestrians will take back control of some areas from cars. The stand was - according to the visitors - stunning and innovative, which was probably, among others, the consequence of looking at the aerial shot of Ljubljana covering the floor of the stand, which showed a bird's eye view of the city. 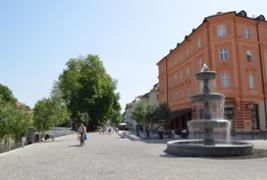