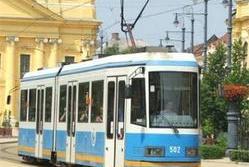 CIVITAS network city Debrecen, Hungary, marks 100 years of green mobility this week with the first centennial of its electric tram network. It’s kicking off its second century of streetcar service with a network expansion: A second tram line is in the works and scheduled to open in 2013.

The new line, substantially funded by the European Union, will advance work carried out during CIVITAS II to reduce car traffic in the city centre. As a consortium member in CIVITAS MOBILIS, which ran 2005-2009, Debrecen implemented access restrictions and a park and ride system to reduce transit traffic through downtown. With the rollout of the new trams, cars may be completely eliminated from the centre.“This pedestrian area will be further extended in the future, so trams will actually be the only kind of any transport mode that will have access to the city centre,” said László Szűcs, Debrecen’s CIVITAS site manager. “Therefore a high standard of service is crucial.” City Hall recently put out a procurement tender for the new vehicles, all of which will offer low-floor access.Electric trams first rolled out in Debrecen in 1911, replacing steam-driven vehicles that had been in service from 1884. The city’s tram service, which today consists of 17 carriages running on a single line, carries nearly 1.2 million passengers per month.Debrecen, situated in the middle of Hungary’s eastern Great Plain, is the country’s second largest city (population of 209,000) and an important seat of higher education.