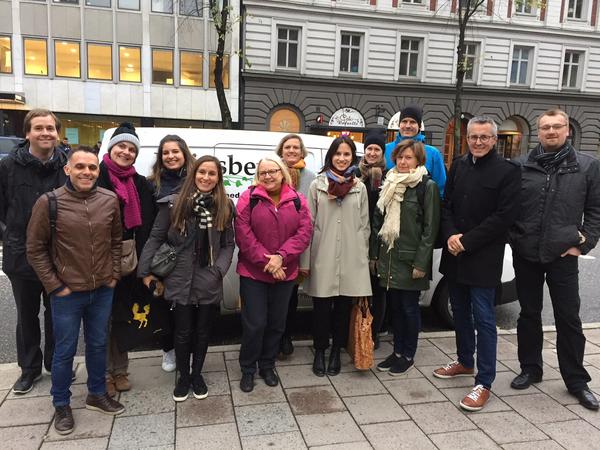 What are two occasions when city authorities need to call at the doors of most residents? To collect rubbish and deliver post and parcels. Stockholm (Sweden) has slashed the cost and the emissions generated as part of these door-to-door services by combining them.

At the logistics consolidation centre, Älskade stad, a group of representatives from cities from across Europe saw first-hand the mini electric truck that carries out these services.

The diverse group had been brought together in the Swedish capital as part of a three-day CIVITAS study visit, which took place from 22-24 October.

Representatives from Braga (Portugal), Cologne (Germany), Gdansk (Poland), Oslo (Norway) and Rethymno (Greece) were in Stockholm to see how they might improve mobility for their residents.

The visit to Älskade stad was just one of numerous inspiring activities they were involved in. Participants also learned about Stockholm’s work related to MaaS (Mobility as a Service), an “innovation contest” that has been organised to change the way parking policy is implemented in the city. They also took part in a workshop on e-mobility. Some of the work shown to the visitors takes place in the context of CIVITAS ECCENTRIC.

Andreas Wolter, the Vice-Mayor of Cologne, was particularly interested in seeing how Stockholm dealt with cycling infrastructure during road works and the congestion charge and low-emission zone in place in Stockholm.

He commented that "Cologne is indeed trying to reduce emissions and improve air quality by reducing dirty diesel vehicles in its streets. Should the diesel ban not be an option for this German city, then the solutions found in Stockholm might function as a good replacement."

Stockholm invests part of the income collected via its congestion charge into improving public transport, such as the new metro line. This means the impact of the charge is two-fold: it acts as both as a deterrent to car use and an incentive to use public transport.

A leading city on e-mobility issues, Oslo was also impressed with the congestion charge system, as well with the e-mobility public charging infrastructure and policies.

In the city, which is also next year’s European Green Capital, the use of electric cars has caught on so much over the past few years that the city will soon be reducing the incentives that it initially implemented, such as free charging.

Once again, a CIVITAS study visit has proven that there is no city, no matter how far ahead of the curve, that cannot learn something from its peers.

One participant said:“the CIVITAS visit has given me fresh input on how I can make my city more liveable!”

Find all presentations from the study visit here (in a zip file).

To find out more about Stockholm's work in CIVITAS ECCENTRIC, click here.