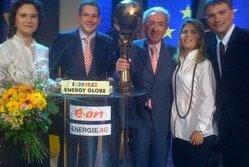 Thanks to the CiViTAS Initiative and the CiViTAS CARAVEL Project, the City of Burgos received the Energy Globe Award 2009 (Category Air) in the City of Prague. With more than 800 project applications received, the jury headed by Maneka Gandhi decided that the efforts concerning the sustainable mobility of the City deserve the Award.

Top-ranking representatives of European government, especially from the field of environment, a glamorous gala, and above all the best environment projects in the world made the ENERGY GLOBE Gala Prague 09 an event to remember. ENERGY GLOBE Award is the most prominent environmental prize worldwide. More than 110 nations participated in this year's selection process with their excellent projects.The excitement was unbelievable in Prague's Veletržní Palác, the venue of the ENERGY GLOBE World Award on invitation of the EU Council. The VIPs meeting in the fully packed palace hall included host and EU President Mirek Topolánek, EU Environment Commissioner Stavros Dimas, as well as representatives of EU and EFTA nations and EU membership candidates. Also attending musicians and artists as Viktor Lazlo or US shooting star Nisha Kataria. The ENERGY GLOBE in the category Fire went to Myanmar for the Burma Solar Hospital Project (they also received the public vote Award). A water supply project in Tanzania was distinguished with the award in the category Water. The winner in the category Youth was the Rock in Rio school project, which promotes solar energy in Portuguese schools. And the award in the Earth Category went to Chile´s project Solving the E-Waste Problem, which took on the challenge of collecting and recycling electronic waste.Burgos received the award in the Air Category thanks to the CiViTAS CARAVEL Project, which was enabling the City to implement a broad mix of sustainable measures. The Lord Mayor of Burgos, Juan Carlos Aparicio, as well as the staff of the CiViTAS CARAVEL project attended the Ceremony and they could celebrate the award in the marvellous city of Prague. This marked a fantastic The End for the CiViTAS CARAVEL Project in the City of Burgos, after receving a pair of years ago the CiViTAS City of the Year Award in the city of Kaunas.